When Grand Rapids Towing Service is called, we hate finding out someone was hurt. Unfortunately, that is what happened when we were called after an accident yesterday at 56th and Taylor in Ottawa County. A Chevy Aveo plowed into a Mazda 3. The driver of the Mazda 3 was sent to the hospital. The ambulance had trouble getting her out of the car. Both cars were totaled and required a towing service.

Please folks, be careful at intersections. We like pulling cars out of the mud, but we hate it when we know an accident has occurred. 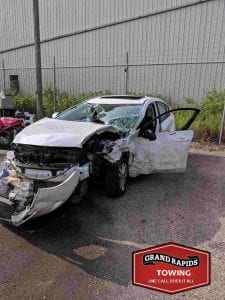 Towing Service after accident with Mazda 3

Towing Service After Accident with Mazda 3

A towing service was needed when police and an ambulance was called after a Chevy Aveo ran a stop sign in Ottawa County yesterday. The Grand Rapids Towing Service operator was notified to come remove a Mazda 3 and Aveao from the garden of a local house.