Our tow company was called a few days ago when a car was found in a ditch 10 feet deep w on southbound East Beltine (M-37) near Burton Street.   The car was discovered by a county worker who was manicuring the grass. The worker noticed the extent of the damage to the car and also that there was no driver or passengers in or around the vehicle. It was abandoned. He immediately called the authorities. The Grand Rapids Police Department quickly arrived on the scene to begin their investigation in the early afternoon.

Grand Rapids Towing was called to remove the vehicle using a 1 ton tow truck. The driver had driven into the culvert in the middle of the night. Rather than calling the authorities right away, he headed home. The driver told the responding officer that he simply forgot to make the call.

We want to thank the Grand Rapids Police Department for assisting our towing company and making sure we had the space we needed to safely get the vehicle out of the ditch and to our tow yard. We applaud them for their quick investigation that proved no one was injured in this serious accident. 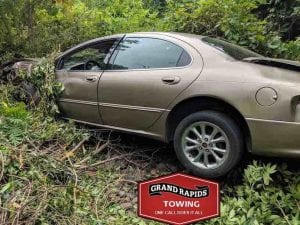 Car smashed after-running into a ditch before tow company called 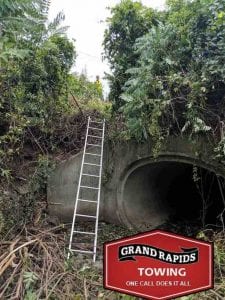 View from ditch where car sit before tow company recovery 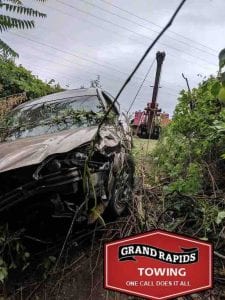 Wrecker pulling out car from culvert

Sometime in the middle of the night last week, a driver hit his put on his brakes near Burton St heading southbound on East Beltine (M-37). Rather than the car stopping, the driver slid on the roadway, hopped a high curb curve, and fell into a 10 feet deep culvert. Once the car was settled in the ditch, the driver exited the vehicle. Rather than altering anyone of the accident, he found a way to get back home. A county worker noticed the vehicle sometime around noon the next day. After notifying no one was at the scene of the accident, he called the authorities to report the vehicle.

The Grand Rapids Police Department arrived quickly to the scene and identified the owner of the vehicle by his tag number. The responding officer went to the driver’s house to see if the driver was home. Fortunately in this story, the driver was perfectly safe and claims he was going to call the authorities. He just never got around to it he said.

Our tow company was called to perform a towing service using our 1 ton tow truck. After hearing the severity of the accident, our tow company quickly gathered everything we would need and headed to the scene. We were able to extract the vehicle from the ditch and safely move it onto the road so we could tow it back to our yard. The temporarily abandoned vehicle took a large amount of damage, but luckily, there were no injuries.
If you need a tow company you can rely on for any type of tow service, be sure to give Grand Rapids Towing a call. Contact us today with any questions.